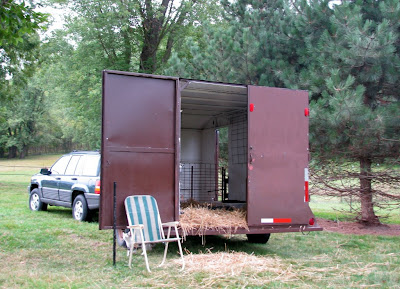 My wonderful Shetlands and I got home at around 5:30 last night. I was SO exhausted (due to my sisters incessant cackling!) that I only unloaded the sheep and the duffel bag with my clothes in it, before heading for bed! Note to Corrine & Marie ~ I didn't even unpack the COOLER!!!. I was in bed by six pm and slept until 7 o'clock this morning. Which is when my dogs woke me up! 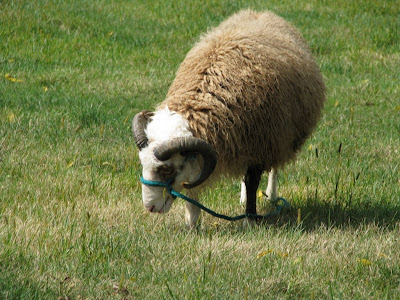 Getting to Jefferson proved to be a bit more of a challenge than I had anticipated. I took the day off work, on Thursday, so I could get everything packed up in advance and planned on leaving by noon on Friday. A local shepherdess who helped me put an ear tag in Prima Dona's ear had advised me that I could bathe my sheep, without disturbing their lock structure by dipping them in a tank of water with "Purple Oil" in it. She said it would lift out all of the dirt and not strip the natural oils from the fleece and not disturb the lock structure. Of course, she didn't mention how MUCH "Purple Oil" to use nor did the bottle that she gave me have any instructions on it. So I decided to give it a try. On Thursday. 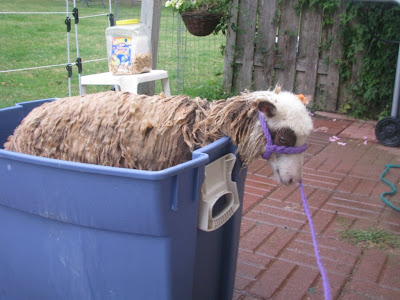 How do you spell S. T. U. P. I. D.???
At least they were clean! HERE'S THE THING...IF you are going to bathe your sheep before a show ~ you should do so at LEAST a week before said show. I would estimate that the three ewe lambs that I bathed lost about 50% of the volume (fluff) of their pre-bath fleece. They were nice and soft though...

Needless to say, the unplanned spa treatments set my planned preparations for departing on Friday a bit behind. I knew, when I went to bed on Thursday night, that I wouldn't be leaving at noon, as planned, and was shooting for 3:00 instead. That would still get me to Jefferson before dark. A workable plan... 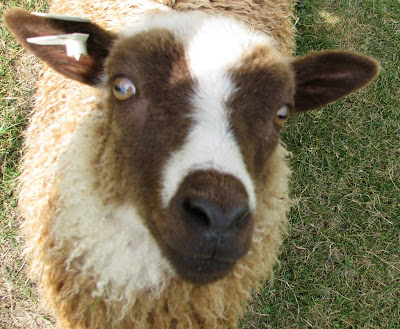 I was very proud of myself in that I did hook up my trailer (even remembering to hook up the safety chains) all by myself. I loaded up the ewe lambs first, then went to lead the rams in from their pasture. As I entered the pasture that the trailer, with the ewe lambs in it, was in, I noticed sheep grazing. It occurred to me that there weren't supposed to be any sheep IN that pasture. Sure enough, the ewe lambs had escaped the confines of the trailer. Somebody hadn't latched the back doors to the trailer after depositing those girls...

OK. Load up the boys. Recatch the girls. Which is easy with everyone except Deja Vu and Masquerade ~ they have to be chased back to the barn and cornered. It's 4:30 now but I'm thinking that if I leave by 5 that won't be too bad...

SO. Every one's loaded. I double checked the hitch and safety chains. All systems go. I started the Jeep and decided to make a circle around the pasture so I had a straight shot at the gate. When I got about half-way around the pasture, the Jeep stopped moving forward. I gave it more gas but it appeared that we were stuck. I was a bit befuddled (imagine THAT!) because the ground is dry and hard so it didn't make sense that my tires would be spinning. I got out to investigate. At first glance, I was mortified to see the back end of the Jeep at about ground level. My first thought was that I had TWO FLAT TIRES!! That's it. I'm not going anywhere. I may as well unload the sheep now. Upon closer inspection ~ which included a glance BEHIND the trailer, I noticed a furrow plowed half-way around the pasture. Right behind the Jeep and trailer. HERE'S THE THING... one should always lock the JACK that is mounted on the hitch to one's trailer in the UP position before attempting to pull said trailer. 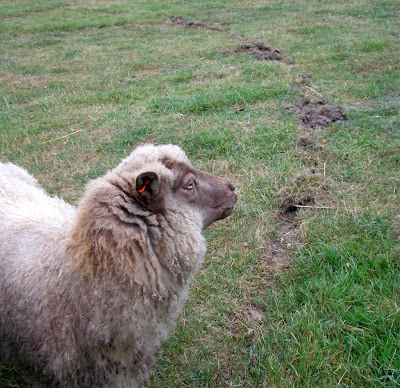 How DO you spell S.T.U.P.I.D. ?????
No one around to help so I go get a shovel and dig the jack out of the ground. The Jeep returns to a more normal (level) position. I put the shovel away. Check on the sheep. And try again. We make the circle around the pasture, across the yard and down my driveway. (note to self: the brakes had all they could manage to stop the trailer at the bottom of the drive ~ allow PLENTY of stopping distance!)
As I turn onto the road in front of my place, I happen to glance in the rear view mirror and see the door to the back of the trailer ~ where the ewe lambs are ~ swing open/or closed ~ I'm not really sure which! Pull over. All ewe lambs accounted for. Lock door. DOUBLE lock the door! Rams are secure. Double check hitch and tires.

It is 6:30 at night and I am on my way to Jefferson. A three and a half hour drive. Without lights on my trailer... 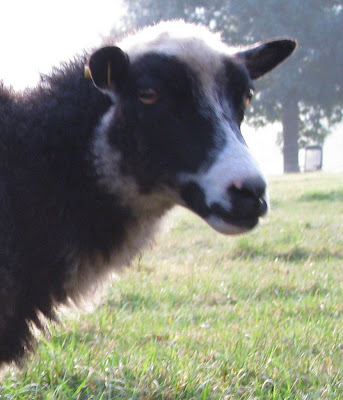 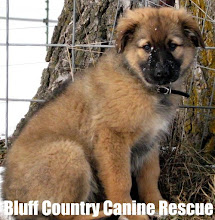 VISITORS TO A SHEPHERDS VOICE 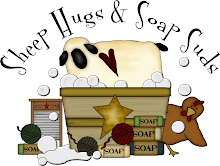 If you enjoy this blog, please consider making a donation.

THANK YOU FOR YOUR SUPPORT!

All original content of this blog, both words and images, is held in copyright by N. Krohn. Use of any kind, in any medium, for any reason without express, prior written consent is prohibited. 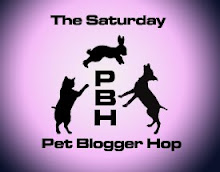 Blogs That I Visit 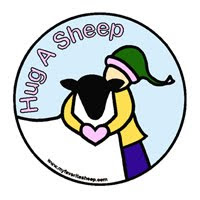 Disqus for A Shepherd's Voice

"From the rockin of the cradle to the rollin' of the hearse....the goin' up was worth the comin' down."

I could listen to this man forever....

Young Kris on a Sunday Morning Comin' Down...

For the Good Times...

The question we've all asked at one time or another...Why me Lord?